Riding the bus in Charlotte, NC 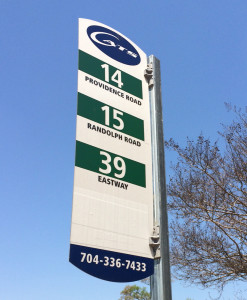 I was lamenting to my family and co-workers that I wished it were easier for me to take the bus to work.   I work a few blocks outside of downtown, and I thought I would have to go all the way in on one route and back out a little way on another, which was not very appealing . Then, I started thinking, “If I really had to, what would I have to do to take the bus every day?”

I came up with a plan  to try for a day, but my wife pointed out that I wasn’t really challenging myself, and that I should try to do it for two weeks. So I did.

The bus route closet to where I live used to come within two blocks of my house. (My wife, who works downtown, actually took it to work for several days after Hurricane Katrina.) However, the budget cuts of the Great Recession caused the route to be shortened. My route now turns around at a shopping center over a mile closer to town. So, I cheated a little. I drove to that shopping center and parked among the cars of employees early every morning.

Next came a 15–20 ride to the downtown community college campus. Once I got off there, I had the equivalent of about six city blocks to walk. All in all, I left about an hour earlier than I had been, and got to work about 45 minutes earlier than I normally do. This allowed me to leave a little before 5 each day, in order to catch an bus which would get me back to my car in time to drive to two different schools to pick up my kids.

(In the interest of full disclosure, I missed one day because I had to take several hours one morning to take my mother—who can’t drive anymore—to the doctor. That day, I just drove on to work.)

Was it worth the trouble?

So, what did I learn about taking the bus? Here are a few things:

In the end, I can summarize my experience this way. I will continue to take the bus as often as I can. It’s worth it to me to avoid the traffic stress and have more time to catch up on whatever I want to do. The extra exercise doesn’t hurt, either.

What if enough commuters decided to take the plunge with me and fill the bus? If enough buses got full enough, the traffic congestion for those who drove, out of necessity or choice, would probably get noticeably better. That’s not going to happen unless CATS makes it easier and cheaper for commuters to get passes.

My commute on the bus was about 4 miles, and if you use government mileage allowance as rough estimate of what it costs to drive, I came out cheaper riding the bus. It was still a hassle, and I was motivated by a personal challenge. For the average person, I’m not sure there the WIIFM (What’s In It For Me) factor is high enough.

Finally, I’m not sure what all the shopping centers in town would do if a third of their lots were suddenly became de facto park-and-ride lots. I do actually patronize many of the stores in that shopping center where I park, but I’m like the person who doesn’t get vaccinated but doesn’t get sick because everyone else did get vaccinated and so a disease becomes rare. (“Herd immunity” for mass-transit, so to speak.) If enough people did it, it would spoil it for everybody.

This site uses Akismet to reduce spam. Learn how your comment data is processed.